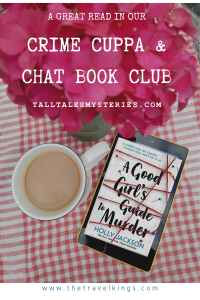 I couldn’t put this book down and read it within two days which is unusual for me these days so why then am I giving it four stars and not five?

If I hadn’t thought too much I probably would have given it five stars but, of course, we discuss books in depth when we come to our Crime, Cuppa & Chat crime fiction book club and whilst we all enjoyed a good romp of a read there were a couple of things that made us pull back from five stars.

As a reader you could tell A Good Girl’s Guide To Murder was a first published novel and you could feel the joy of it. It’s got a wonderfully refreshing feel to it but there were parts where many of us felt the author had changed her mind as she was working towards the ending and then had left those same parts in either to confuse or lead the reader on. For those who have read the book I’m talking about the B&B which in the end seemed to serve no purpose.

I’ve now also read the sequel, Good Girl, Bad Blood, and loved that every bit as much if not more because everything just seemed right although I didn’t work out whodunit in that one whilst I did in the first one.

Holly Jackson’s books are aimed at the young adult market and you can tell that from the moment you open the book and are presented with an unusual storytelling style with recorded interviews and notes. At first I was a bit taken aback and thought I wasn’t going to get into the story if I was going to have to read transcribed notes but I very quickly fell into step with the main protagonist Pip.

Pip finds herself drawn into investigating the murder of a local girl five years earlier. She’s only planning to use the case as a project for an additional qualification but she meets the brother of the young man accused of the murder and from then on she can’t resist digging into the case to prove his innocence.

A Good Girl’s Guide To Murder obviously deals with a murder but there are other more mature themes involved too including rape and drugs but it’s still a light murder mystery in my mind and it’s well written certainly for the most part because you fly through the pages. I believed in Pip and Ravi although there was a moment when I did say out loud that there was no way Pip would do a particular action but I accept that was just a device to show how far Pip was prepared to go to discover the truth.

Would I recommend this A Good Girl’s Guide To Murder? Yes but remember it’s written for a younger audience!

And would I love it if you purchased your copy of the book through my Amazon affiliate link? Yes of course I would so you can get it here. Thank you.